Ad blocker detected: Our website is made possible by displaying online advertisements to our visitors. Please consider supporting us by disabling your ad blocker on our website.
Currently Working on Content Creation. If you have any ideas you'd like to share, please email us!

I finally decided to creat a topic about him, I really dislike him, most of his pranks are staged as fuck, ESPECIALLY the gold digger one.I really feel sorry for the dumb asses who believed it and started to claim that every women are gold diggers.
And the drug one as well is fake, just look at the CRAPPY ACTING of these pricks.

The only video of his I've seemed to enjoy is this one:

I'd say at least 75% or more of his videos are staged/fake. Especially the drug busting prank.
Top

^^^You're right, I also cannot stand his personality, he seems to be a huge douche bag.
Top

what made you think they're staged?
Top

m9283 wrote:
I'd say at least 75% or more of his videos are staged/fake. Especially the drug busting prank.

I don't think the drug bust prank was fake. The reaction wasn't as good as it could've been and the Janoskian kids were being little shits.
Top

this was the worst thing I watched, very awkward to see him jack off his tiny limp dick.

I can't see him the same way anymore.You could tell how he felt, he was all nervous and turning red. And the way he gave the condom to his friend

I would be fucking ashamed if i WAS HIM I wonder if his mom is aware of it.
Top

pseudo1 wrote:I would be fucking ashamed if i WAS HIM I wonder if his mom is aware of it.

She is lol. I've seen it been joked about with his mom around. In one of RomanAtwoods vlogs
Top

pseudo1 wrote:I would be fucking ashamed if i WAS HIM I wonder if his mom is aware of it.

WOW If I was his mother I don't know how I would have reacted I really REALLY hope that she will never see it, it has to be one of the most humiliating thing he has done.
Anyway, this guy is like a crook, all of his pranks are fake as hell, it's not funny anymore.Did anyone of you saw the "how to get girls to kiss you" video ? I'm like 98% positive that this was staged, but if it wasn't, well I feel like these women have no respect for themselves, I mean it HAS to be staged, no girls I know (including myself) would have fucking let this prick french kiss them like that.
The thing that bothers me the most in that video is that immature teen guys who watch him will think it's okay to grab random girls in the street and kiss them, I am also scared that a lot of them might be charged with sexual assault because of that and be listed a sexual predator for the rest of their life.

I hope no teen boy sees him as a role model.
Top

He was in some of Roman Atwood's recent vlogs and I skipped them because of that. I just cannot stand this guy, he's not funny and he's a huge douche.
Top

Used to like him until I watched his vlogs and looked through his instagram. He's SUCH a douche. I thought he was just joking most of the time, but now it's very clear to me that it is no joke!
Top

He's such a douche. A lot of what he does isn't genuine at all and I feel like he tries so hard to be something that he isn't.

His interview with Rhett and Link was really hard to get through, which is crazy because they usually get the best interviews out of people. He was just full of himself. When he started talking about all the good things he has done for people I had to dip out. He sounded so proud of himself.

Actually, theres a video of him getting pranked on PrankvsPrank. It's the worst. His sleazy facial expressions make me want to puke every time.

"He probably wouldn't be able to get it up anyway.﻿"

The fact that when he approaches girls - usually way out of his league - and they tell him he looks good/is hot is enough to suspect there's something fishy about his vids. I know there are girls, who are too nice to say "No" directly, but come on. I'd just be like, "Oh, you're this ugly dude, who couldn't get it up", push this douche away and go on with my day.
Top

He looks like Squidward!!! Most Russian guys I've encountered are fiiiiiiiine, but damn, he's not a cutie.
Top

LOL. No. Maybe his older pranks were real, but it's very obvious that they're staged now... He even "pranked" the same girl (I think she was in some adult film) three times now? Some of the are actors....
Top

Why does this idiot set out to prove himself by getting arrested? So stupid and distasteful, you are just making a really really poor name for yourself.
Top

i think he does a lot of drugs. i was skeptical when him and jesse got in the uber together late night. they looked like they were up to no good
Top

I don't know if anyone watches football here but he ran onto the field today. I don't think it showed on anyones TV because FIFA will move the camera to something random when stupid shit happens. But people got pictures and it's on twitter. 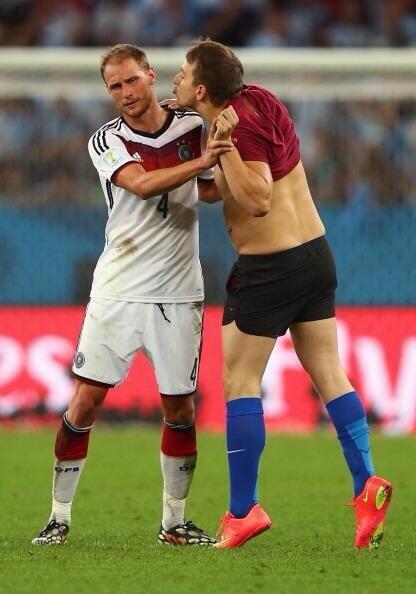 This guy is such a trashy loser
Top

Wow.
He looks like an utter idiot in those photos.
Not much more to say really.
Top

This really doesn't help YouTubers at all. Some want to be taken seriously and then there's this guy...
Top

foreverever wrote:i think he does a lot of drugs. i was skeptical when him and jesse got in the uber together late night. they looked like they were up to no good

Well he smoked weed on video with Snoop Dogg. He's a young guy with a lot of money so he probably does drugs like coke. He really seems like the kind of guy you'd see at the bar shit faced being extremely obnoxious and lewd towards girls. He has a bad rep and he's gonna be washed up in a few years.
Top
Post Reply
36 posts